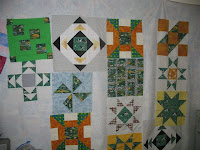 UFO Mom has picked March's number. I will be working on # 2. These blocks were made in 2004 by members of another online group. We did a swap called SWAN-Swap Without A Name. I made one quilt from the blocks for a school auction for my Grandkiddos. Then these blocks were put away with plans to make a few more blocks and maybe make a couple charity quilts.
A couple of them were set on point for a center block but now I'm rethinking (actually I forgot what I had planned to do!) and may take the corners off.......I don't know. I'm going to leave them up on the wall and look at them for a few days.
I finished quilting one of Crystal's quilts. I have the second one loaded on the frame. After dinner, I'll wind some bobbins for her quilt and several more for a couple of charity quilts I am doing for my friend.
I spent a good part of the day cutting fabrics from my scrap basket. I'm not making a dent! We have a retreat in less than 2 months and I found a new (yeah, I know!) scrap project I want to work on.
Time to heat up the leftover roast beef dinner from the other night. Hubby came home hungry as a bear. I think I might take some pumpkin out of the freezer and make a couple pies tomorrow. It's supposed to start raining and be regular Pacific Northwest weather again so comfort food is calling me.
TTFN
Posted by Judy D in WA at 4:50 PM

Neat blocks - it is fun to decide how to put them all together. Not really looking forward to the rain - but guess it is much better than snow - which we still have plenty of in our yard - I want SPRING!!!!!