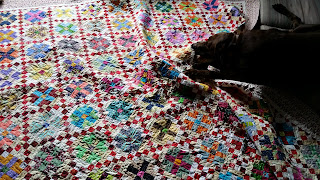 Garden Party is finished and Daisy tested and approved.
She thinks if I lay a quilt on the floor for a picture,
she needs to be right there!
Hope you enjoyed that Daisy Doodles,
it's the last time you get to lay on this quilt. 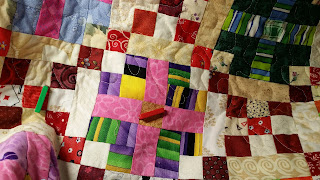 I quilted a simple meander.
After removing the wavy outer borders, this top sat there taunting me.
I finally couldn't take it any more so I got to work on putting them back on the right way.
No more just winging it for me.
I knew better at the time but decided to risk it,
My Big Mistake!
I am thrilled with this quilt!

I don't think I did too bad on this one,
only 2 years marinating before finishing. 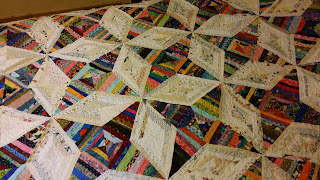 Hooray! Virginia Bound is a finished quilt!!!
She already has a home in our travel trailer. 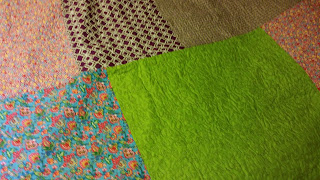 I also busted some hunks of fabric for the back.
Scrappy front needs a scrappy back.
Quilting is simple meander.
Scrappy black binding came from my binding box.
I need to use more black binding since there was only 4 inches left over. 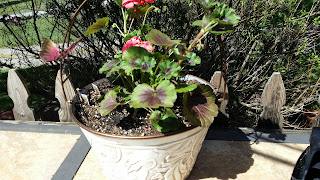 Isn't this pretty?
A present from my honey!
The butterfly is a present to myself. 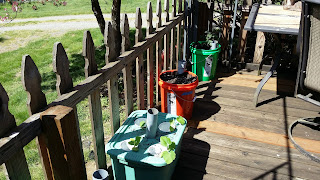 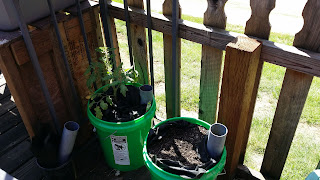 Bucket on the right has nothing in it yet.
On the left is Debut Hybrid tomato.
It's supposed to get to about 3 feet tall, I'm hoping for taller. 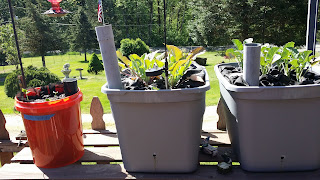 In the orange bucket are acorn squash-my absolute favorite squash.
Middle bin is cauliflower with itty bitty caulis starting to show.
On the right is broccoli.
I'll pick up more broccoli and cauliflower next time I'm shopping. 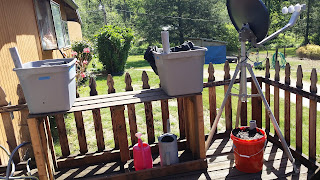 The bucket under the satellite dish is hailstone radishes.
Right side is zucchini and yellow crocked neck squash.
On the left are 3 kinds of cucumbers.
In the back are lemon, middle is little potato and the front is Poona Kheena.
The Little Potato and Poona Kheena are rare seeds and I'm anxious to try them.
Once they start and grow a bit, I'll add a trellis. May even move the bin to the floor. 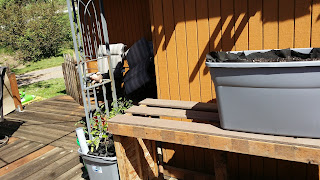 This is a tub of  Jade bush beans.
I'm hoping to harvest enough to can about 100 pints of beans. 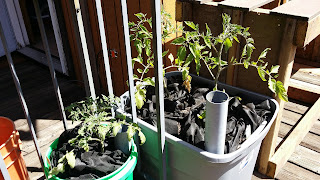 In the gray bin are 2 Roma tomatoes.
And in the bucket is another Debut. 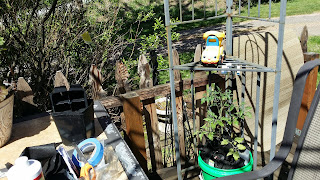 Tomato plant #6 is Super Sweet 100 Cherry.
We are most excited by this one.
We keep talking about having tomatoes and bacon for breakfast, lunch and dinner.

Both cherry tomato plants are estimated to get 8-12 feet tall.
We are not replacing our deck canopy this year so the corners become tomato cages. 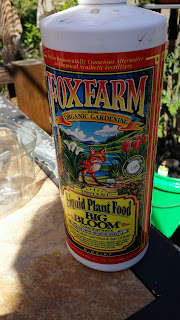 The lady at Walmart told us about this fertilizer that she uses on her plants.
Too bad we can't buy it there but the local Ace had it.
I need another bottle.
The wicking tubs need fertilizer added whenever water is added.
I learned about wicking tubs from Gardening with Leon.

I can't wait to do another update!

I certainly didn't intent to take a long blog break, I thought maybe a week or so but it turned into 3 weeks.  I don't know how consistent I'll be now but I'll give it a go today. 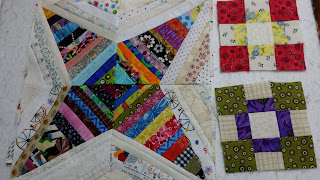 I've been putting blocks together!
Virginia Bound and Chunky Churndash leader/ender blocks.
(VB is in Scraps and Shirttails and CC is a free pattern on the Quiltville blog.)
I hope the next time (after the reveal at retreat) you see VB,
it will be a completed quilt.
That's my plan right now. 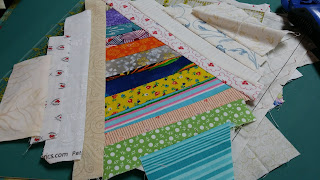 In my last blog post I told you about getting sidetracked with these blocks.
I had planned to take these to retreat and work on them. 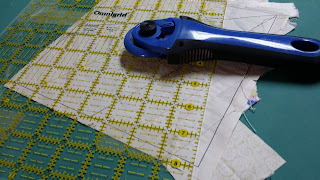 But my plans changed as I sewed and trimmed just a few more and a few more.
Pretty soon there were no more blocks to take to retreat.
Survivor was on so I grabbed the stack of blocks and an empty trash bag
and plopped myself down on the couch to watch TV and depaper.

On Saturday I got out the Go! Cutter and took care of a pile of scraps.
When that was finished, I decided to go ahead and get the blocks into
4s so I could sew my big blocks at retreat.
Bahahahaha,
I have several of them already sewn together.
I'm now hoping to reveal the finished quilt at retreat
since I how have a new roll of batting and renewed energy. 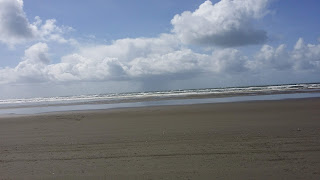 We spent a couple weekends at the beach.
The beach always refreshes my soul. 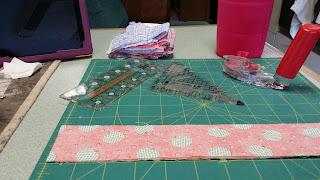 I took along some fabric strips with a plan to cut and kit up some blocks.
I think there are 40 little blocks ready to go.
These will to taken to retreat.
Maybe. 😉

Now I'm headed over to check on what everyone else is working on at
Small Quilts and Doll Quilts Design Wall Monday.

Until next time,
Have a wonderful week.