The Bees Are Here

Today was bee day at the farm.  Crystal and Mike picked up 2 boxes for us and 2 for themselves.  We went to the fair last August and Mike spent quite a bit of time talking to the bee man.  The next thing I know, we are both going to become bee farms.  Well that is if you can call 2 hives at each place bee farms.  We call it the beginning. 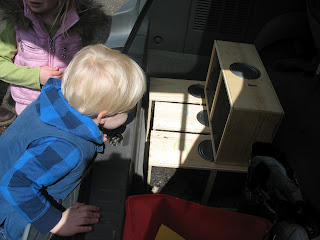 I was quite surprised at how the bees were packaged.  I don't know how I thought they would show up because this is really is Ernie and Mike's project and I am pretty much clueless.  I love that the kids are so excited but a bit scared at the same time.  Which is the way it should be. 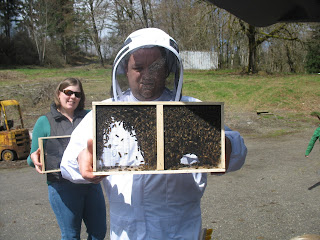 See the storage container behind Mike's head?  To the right of that is where the hives are.  Crystal and Mike carried the bee boxes up to the hives.  I think by now we are on trip 4 up the hill.  Once everything was up there, I think it went pretty fast.  I don't know what Mike thought though.  LOL

He has read everything he can get his hands on about bees and beekeeping and has become quite knowledgeable about all of it.  He is our Bee Whisperer.  I guess I shouldn't call him City Boy anymore. 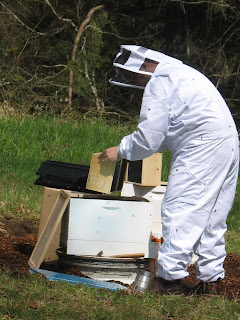 I was quite impressed with him as he reached into the bee box to take out the little box that held the queen.  Look, no gloves.  I realized I was holding my breath.  I didn't have a clue what would happen but I had some pretty vivid images of a swarm.  There is a method to getting her out and set up in the hive. I think she gets released in another couple days.  Then the bees were dumped into their new home. 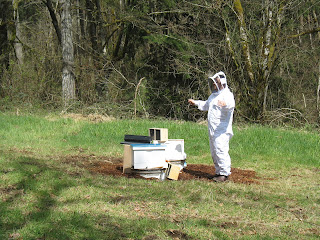 TaDah! Hive 1 is done and he lived through it!  Within a few minutes, hive 2 was set. 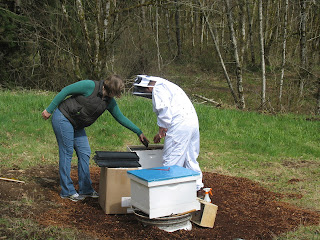 Look at Crystal, she was videoing while he was working and I was hiding.  She kept moving closer and closer.  I posted some photos on Facebook and this is copied from there.

So exciting! This is on my bucket list...I would love to have bees!

Kudos to you folks! Bees are such a necessity to our lives and they are in trouble. So I think it's wonderful that I'm seeing more and more people starting to bee keep.

I am so excited for you and want to hear all about ever step along the way at your bee farm. I want bees so bad! It's nice that Mike is really interested and is so knowledgeable.