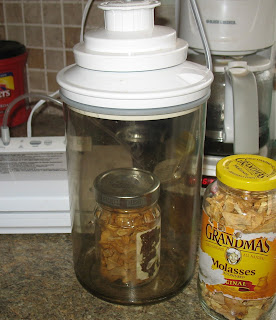 While at the produce market yesterday, I bought a $1 bag of 5 apples and a pear from the discount bin. They didn't look too bad, a bruise here and there but not pretty like the apples and pear we like to buy.

I cut them up last night and loaded up the dehydrator. This morning the little bits were all nice and crispy. I can't throw away a perfectly good jar, not when I have a Food Saver and a large canister. Did you know you can seal up these jars if you put them inside the canister and seal the canister? When you release the vacuum seal from the canister, the jar lid pops and it's sealed!

This mix of apple and pear bits are labeled and put in the cupboard until its time for oatmeal cookies. Or maybe just as a snack!

Now I just have to figure out how to get the pickle smell out of some other lids. After a trip through the dishwasher, the smell remained. I thought soaking them in baking soda would do the trick but after they were closed up for a while and then opened, I could still smell the pickles. Any suggestions?

Now to tackle that bag of onions!

Have you tried leaving the jars/lids in the sun? I do that with smelly dolls that are not washable.

The Sewing and Knitting Loft said...

what a great idea! I have no experience with dehydrating and vacuum packing jars. This is a neat thing to know. Thanks for sharing.

Speaking of kitchen gadgets, stop by my blog for a chance to win a $60 CSN gift certificate for all the kitchen gadgets you can buy, or anything else:
http://quiltingranny.blogspot.com/2010/08/going-back-to-school-giveawaywin-60.html

I'VE ALWAYS WANTED TO BUY A DEHYDRATOR! (oops caps lock on..)AND a vacuum sealer! You must be having a blast!~

Have you tried soaking the lids in a little baking soda and water?
I knew you were a quilter but I didn't know you were a foodie too! I'll be back!
ps, thanks for visiting my blog!