Our home used to belong to my Gramma and Grampa Maple. I love this old house. We have done a lot of things to change this house but one thing that hasn't been changed too much is the "hall cupboard". It's always been called the hall cupboard. Always. It was built by Grampa with rough cut lumber. The shelves are far enough apart to hold quart jars. 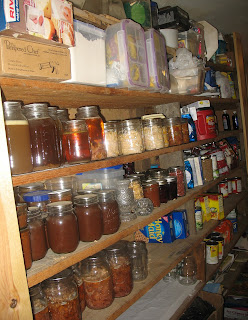 Right now these shelves hold too much junk. Not all of it is junk. See my canned beef and chicken, my fabulous stock. There are a few jars of jelly left and some other stuff that probably needs to be used up soon. (Ignore the dust on the top of the jars.)
The shelves need to be cleared out and organized. (I have already taken lots of stuff off the shelves. And I'm not done yet!) I had big plans to paint them but that didn't work out too well. Proof of that is right here. I still want them painted. I just don't know when I'll get it done.
With my revitalization of coupon shopping/stockpiling, I needed to make some changes. BIG changes! Today was the day to start. I had bags of groceries on the floor and shoved into what has been labeled the scary room. It has also been known as the middle bedroom, Doug's room, my sewing room, the "when will it become the gun room" and the "if you don't know where to put it, put it in there" room. Now it will be known as the pantry. Well that's what I'm calling it anyhow! Half will be my stockpile side and the other half will be for Ernie's gun stuff. He can call it the gun room if he wants, he'll just be wrong. And probably his half will be more like a quarter. 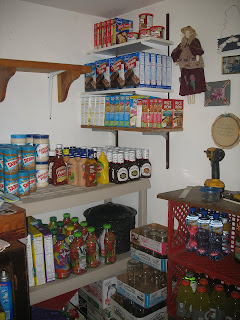 So after some work, here is one corner with lots of things on the shelves. On the wall are a few of my treasures and on the left is a cabinet piled high with more junk. That's up next!
I know some of you are trying to count, so I'll just tell you. 5 cake mixes, 4 frostings, 25 brownie mixes, 20 pastas, 12 rices, 26 BBQ sauce, 3 A-1, only 3 mustard, 8 salad dressings, 3 ketchups, 8 Miracle Whips and OH NO, I'm out of mayo! 19 peanut butters, 6 cereals, 13 asst. V-8s. On the right is Gatorade and Propel for Ernie's lunch and with it on sale right now, I am going to go buy more. Not one item was bought at full price!
Yes, that's just a start. There is more to be done. I have a grand plan to have the small closet full of toilet paper before winter. Yes, it is still sold in winter but Ernie is having another surgery and I don't want to have to "run to the store" for anything! And it's just something I want to do. 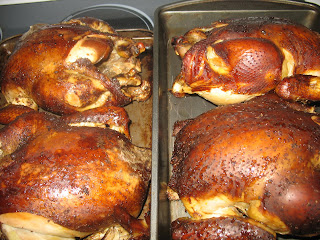 And while all that was going on, these were in the smoker for Crystal and after they are cool, they will be packaged for the freezer. As will the bones and skin for a later stock making session. I don't know if Crystal wants smoked chicken stock but I sure do.
Now I think I'll spend a bit more time in the Pantry.
Posted by Judy D in WA at 5:26 PM

Now, that is what I call a stocked pantry!

I lived on a farm (35 miles from a grocery store) for many years, so I learned to stock a pantry, too. Mine is not as extensive as yours, but it works for me.