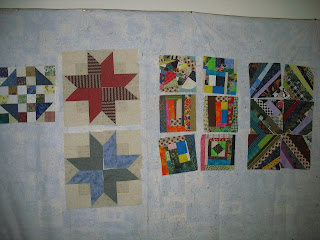 I want to know who stole January away! Did that month go by fast or what!

I hadn't done much sewing last week but on Saturday afternoon I played for a while--ok, it was midnight when I turned off the sewing machine! I played in my string bin and my crumb box. Here are a few of my blocks. They just go in a pile until there is enough to do something with. Sometimes I get the bug and just sit down and sew away on those little blocks.

I got an email yesterday from my blog friend Diane saying she had been making crumb blocks. She is showing them on her design wall today. They are so fun to make. We thought it was rather spooky that we both were doing the same thing without knowing.

The scrappy block on the left is hopefully the last of the leftover bits from Quiltville's Orange Crush Mystery . That block will go into the 9" block bin. Next to that is the beginning of a 2 1/2" strip bin clean out using Quiltville's Boxy Stars. The lighter blue fabric is at least 10 years old and that is the last strip of it. There is a little left that will be made into 2 1/2" squares and bricks.

Go to Judy L's Patchwork Times and see what everyone has on their design wall. Judy has a quilt on her wall that is definitely on my to make list.
Posted by Judy D in WA at 6:18 AM

I haven't done crumb piecing in a while; need to do that to get rid of some stuff around here. Great job!

Wow, you sewed til midnight? I can't do that anymore...I wimp out by 10! What fun you had though! Good idea to keep putting together blocks and just see where it leads you. Though I am more the type to have a pattern and a definite plan in mind. Too uptight huh~ Well, any sewing is fun sewing! Enjoy!

nice stuff going on Judy. How big are you squaring your crumbs to? (just curious).

That's a lot of projects - you are a great multitasker!

You've just got a little of everything up there don't you? I keep my design wall to one project at a time which is meant to encourage me to finish it so I can put something else up there.

I made Judy's Big Stars back in May '09 and just put the borders on it this past weekend while at a quilting retreat!! The blocks went together pretty quickly as I was working from pre cut pieces from my stash. You gotta love those 16 inch blocks.