What's On Your Design Wall? 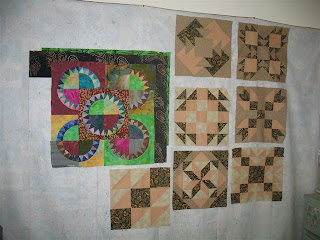 My design wall is a flannel back vinyl tablecloth. I don't know how old it is but I do know that I bought it at JoAnn's several years ago and it was 70% off and cheap--maybe less than $2. I bought a new one yesterday and it was $2.06 with a cute Easter print. I'll put it away until this one dies.
This morning I finished my BOM from Stashbuster Yahoo Group. I am really liking the way the blocks turn out. And the fact that I am keeping up. So these blocks will be folded neatly in half and go back into the project bag with the fabric and wait patiently for May's blocks.
I am auditioning border and binding fabric for the wallhanging. I bought Deb Karasik and Janet Mednick's book, Quilt Mavens and decided to do a simple project with my batik and hand dyed scraps that I bought a while back.
As I was sitting here skimming through the book, I think I will investigate a pieced border for the wallhanging. They have such cool designs and now I don't really want a plain border.......Maybe that black/paisley batik can be the background with some bright spikes...........Oh, the wheels are spinning fast.
I had planned going to go to the kitchen and making a couple loaves of bread, baking Hubby some cookies so he'll stop whining but with my last brilliant thought, that may be put off until next week...........and the plan to later getting the quilt loaded that has been sitting here laughing at my lack of ambition has just been put on hold!
What's on your design wall???
Posted by Judy D in WA at 8:44 AM

Just think of all the calories you saved! LOL

I don't have a design wall - I had one - a tablecloth like yours - and then I got another shelf for my "stuff" and down it went. So my design wall is my bed - or if someone is here to help - the carpet.

Lovely blocks. I like the idea of a pieced border too.