Another Top For the To Be Quilted Pile 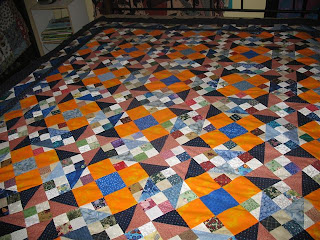 I finished the Orange Crush top! Yeah!! I'm not sure when I started this and I'm too lazy right now to go back and look. (I did look it up, we started it March 31, 2008 and the final clue was given June 7, 2008.) I'm still not sure how much I like it. I'll decide after the quilt is finished. If I don't like it, someone else will. But it is going to find a home on my bed for a while so don't get all excited Little Miss DeeDee! 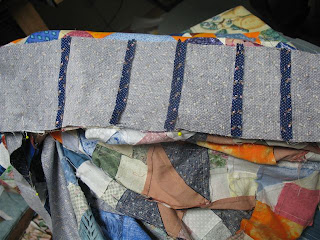 It was close on the border fabric . After cutting the binding and inner boarder strips, I didn't measure how much fabric was left. This was a piece that was given to me a while back and I'm thinking it is from the late 70s, early 80s. Something had been cut out of it but it looked like it would be enough. Forget that saying measure twice....I just cut. Then I sewed on the side boarders and made the top and bottom. After measuring, I was about 8" too short. So I dug through the garbage can, found all the leftovers and pieced them to get enough to finish the top. After all that, I had 3" leftover. Oh I would have figured something out. I just didn't want to make a new border and really didn't want to take off the ones that were already on.

I just pulled out the flanned that I want to use on the back and I'm about a yard too short. There is none of this in the garbage can but there is lots of flannel in the tub that would love to live on the back of this quilt. But for now, it goes on the to be quilted pile.
Posted by Judy D in WA at 1:46 PM

I think your solution worked out just fine!! And even if you would have been short, you would have gotten it to work without starting over. Personally, I think the orange crush is 'orange'!! But I like it!!
And using a pieced flannel back would be perfect. I actually like pieced backs better than solid fabric ones, so it's just my thoughts on the matter!!
Have a great weekend!!

YAAYYY! Another UFO (or WISP-I think I do like that term better, but it is hard to change) bites the dust! You get the "Well Done Lass!" award for the day - I think that one is/was three years old... because I started it, but life got in the way. It didn't even get far enough to be a UFO/WISP.

Have a great weekend!