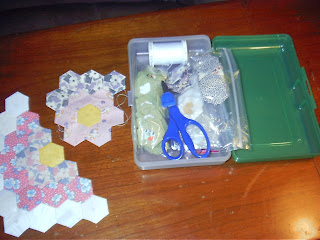 I spent the weekend with 4 Grandkiddos. I took along my hexie box  to work on the last 2 hexagon flowers for Mae's Grandmother's Flower Garden. I had white and green hexies to glue baste so I worked on those for a while then I wanted to stitch while they watched a movie.  I hadn't been stitching long when Mae came to sit by me and talk about her quilt. She is quite excited about laying it out this week.

Then she wanted to play with the basted hexies. So I gave her the last baggie kit for the half flower and told her to make it just like the one I had with me. Pretty soon she was adding whites and then I gave her the printed hexies I was working with. She made up her own designs and was having lots of fun. I asked if she wanted sew a little but she passed on that. Maybe next time. I was to hurry and get this done! Because she is so excited to look at it!

So hopefully some time during the week, we will get this all layed out and the rows will start being sewn together. I have one row already sewn so that should speed things along. :)

See other fabulous design walls at Patchwork Times.
Posted by Judy D in WA at 7:13 AM

Isn't it fun when the grands are not only interested in what you're doing, but they want to have their hands on it, too??!! My favorite!! :)

You are having lots of fun with your Hexies. Nice to take some slow stitching time while the grands are there. It's going to be awesome!